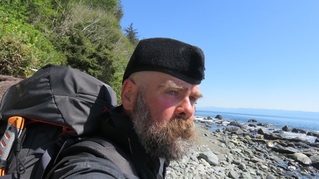 I imagine myself as a man of the frontier, even though I was born in the Okanagan Valley and live on Vancouver Island. It is perhaps the close proximity of nature that fosters this little fantasy of mine - I can sip a French roast in the morning, confront a bear in the afternoon, and then relax with a Cabernet Franc in the evening. I have always loved the wild and the unknown whether I was tramping through the woods around my home town of Summerland, pushing through the bogs and trees of the forests of Southern Vancouver Island, or travelling further afield to the North Coast of British Columbia. It was this love that  led me to a career in the Royal Canadian Navy and the opportunity to walk the streets in China, explore the sleepy towns of Hawaii, swim the beaches of Okinawa, hike alpine ridges in Alaska, and most importantly, explore the rainforests of British Columbia. It was the navy, combined with my love for science fiction that led me into a career as an independently published writer of science fiction and fantasy.

I love science fiction. I grew up on the original Star Trek, original Battlestar Galactica, Buck Rogers, and Space 1999, then graduated to STNG, DS9, Red Dwarf, and finally to the new Battlestar Galactica. I was inspired to write military science fiction and vowed to give it the gritty slant that I often miss in popular science fiction. In the Navy, I sailed on many ships living in cramped quarters, often eating uninspired food and working long hours. My series of books, Europa Rising, Jupiter Rising, and the upcoming Titan Rising, focus on the difficulties and often unpleasantness of living and operating in space where it takes weeks and months to go from mission to mission and not the hours and days of popular science fiction. It is the challenge of operating on one's own and without support and with communications that can take hours that I find interesting; it seems to hearken back almost to the age of sail.

I also love westerns. This perhaps leads me back to my frontier fantasy; that fleeting existence on the very edge of the wilds where danger and a frightening darkness lurk. This is a world of my imagination - of safety in a civilization surrounded by an ocean of the wild unknown. This is also the world of my second series, The Scarlet Bastards. Set in an inhospitable colony twenty light years from Earth, it is the memoir of a young runaway who joins a United Nations chartered army of the downtrodden and poor for service off-world. It is an existence on the back of a tundra camel fighting gangs and war lords and thanking each day's sunset for yet another day of survival and hating it for another chance of death the following dawn.

Finally, I love the myths of my Celtic people: the tales of Fionn Mac Cumaill, Cu Chulainn, selkies, red caps, and Pucas. The joy I find in the fundamental belief that the world surrounding us is far more alive than we know has led me to my first urban fantasy, From the Little, the Much is Known. We were not the only immigrants to Vancouver Island in the 19th century, and a young girl in the depths of despair will find that out on a hill top in Esquimalt, British Columbia.
Confirmation email may take several minute