The Scarlet Bastards - A Company Soldier 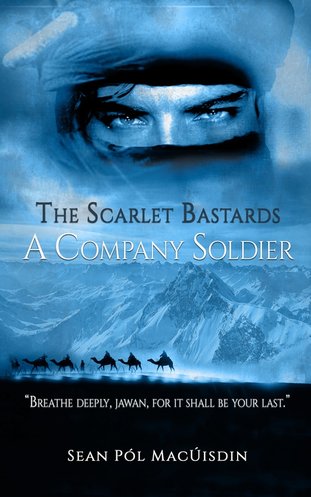 “Breathe deeply, jawan, for it shall be your last.”

Spring 2098 – That spring was long ago when I was a weak chinned, hollow chested teenager from the Okanagan Valley of British Columbia. When I looked upon the snowy tundra of Samsāra, the United Nations colony some twenty light years from Earth, all I could see was my doom. I was a foolish runaway seeking adventure in the United Nations Off-World Legion, with dreams of camaraderie in the rough and just enough danger to thwart the imposed tedium of the future planned by my parents. The colonists and other jawan soldiers of the Legion had very different plans for me, however.

There were the Tongs of the Black Hand that held the rocky beach of the Coloe Vallis where I and the Legion and a few score Neo-Celts under their chief, Amandeep MacGrogan-Singh, assaulted from a trio of wretched paddlewheelers. There were those Gliesiun refugees that I and their champion, a prospector named Fremantle Freya, led an attack against the murderous Tongs that hunted them. Of course, there was that Sindhi pirate that threatened to cut my throat on the paddlewheeler Naimadan Regina as we defended a boat load of fresh, terrified settlers.
​
My name is Alexander Rutherford Armstrong and in my years of retirement I can look upon the events of my youth with a certain dispassion. Back then, however, I was a terrified and screaming teenager soon to be called Sikunder. I endured the rough ministrations of my sometimes vicious comrades, and much else in my years in the Legion though it was always in the shadow of my decuria leader, Subedar Angus Motshegwa, who was famously known in the Legion as MacShaka the Tartan Zulu.


Five Stars - "MacUisdin sets the tone early for a raucous adventure and doesn't disappoint throughout. It's the story of a young man from bucolic British Columbia who finds himself 20 light years away on the planet Samsara with the sorriest excuse of a UN brigade in space. In this novella, MacUisdin doesn't just sketch his world and his characters, but splashes them in glorious Technicolor, from MacShaka the tartan Zulu to the felonious gang of ne'er-do-wells and outcasts that comprise the UN Off-World Legion, aka the Scarlet Bastards.

A veritable barrage of the senses, The Scarlet Bastards is hilarious, exotic, surreal, vivacious and poignant. The writing juxtaposes travelling through hyperspace with travelling by tundra camel; hides gems of wisdom in profanity-laden tirades. It's a roller coaster ride, but at it's heart it's an old tale, of a boy becoming a man far from home. Great writing and Highly recommended."


Five Stars -  "Sean has continued to expand the excellent universe in which this novella takes place. It rivals that of Asimov's Foundation with additional unexpected features. I'm still trying to figure out MacShaka's dialect. It's a great read for those of you who are yearning for the classic science fiction you grew up with made slightly more adult. Great read!"

Five Stars - "I feel like I've been saying this a lot lately, but again, The Scarlet Bastards is not my normal cup of tea. It's a novella, only about fifty pages or so, dystopian sci-fi. I was fairly hesitant about reading the book, and almost turned it over to my poor husband (who is absolutely swamped right now) but after reading the first page, I decided to give it a try.

Now, has The Scarlet Bastards changed my mind on dystopian sci-fi? No. It's still not my cup of tea. However, I am glad that I gave this novella a shot. Perhaps it was because it was short that I was so entrenched in the story, or maybe it's just the fantastic writing of Mr MacUisdin, but either way, I was hooked, and when it ended, I found myself wanting more. That was new, but that was also a good thing.

The characters are fantastic, the main character so well developed it didn't take me long to connect. It's yet another book I don't want to give too much description about, so I don't take away from the story itself. Read it, you won't regret it. Even if you don't like the genre, give it a try. I'm really glad I did, and I'm really happy to give this book a five out of five stars. I won't be surprised if I find myself tempted enough to pick up one of the longer novels and give it a read."

The Scarlet Bastards - The Cardinal of Gleann Ceallach 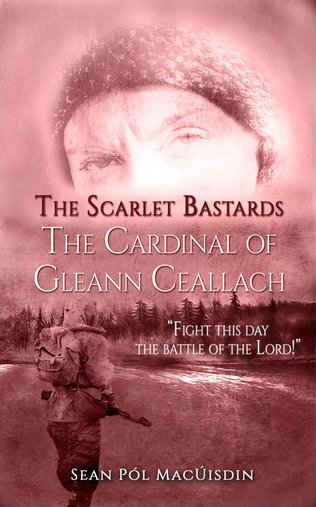 "Fight this day the battle of the Lord with thy legions of holy Angels!”

2098 – I was a hollow chested, thin limbed, seventeen year old runaway from the Okanagan Valley in British Columbia who was in fear and awe of the men and women of the United Nations Off-World Legion. Roughnecks, criminals, and murderers; my colleagues were the thin scarlet line of poorly trained and downtrodden that protected the United Nations colony of Samsara twenty light years from Earth. I was much abused by the third world refugees who joined the ranks and nicknamed me 'Sikunder', an object of derision who joined the Legion for fun and not necessity.

In my retirement, where I sip Cabernet franc and enjoy baked brie and cedar plank salmon, I can now recall that terrible day where I was thrust unwillingly into a column of constables and hired guns to show the UN flag in the gleann of Ceallach and the horrific and bloody events with the tribes of refugee Gliesiuns that followed. It was a day where I was also most fortunate to encounter the Reverend Mother Mary Margaret Coulthard, better known as the Cardinal of Gleann Ceallach, and her convent of fighting nuns of St Brigid. Together, with a wily Texas Ranger and the infamous Subedar Angus Motshwega, better known as MacShaka the Tartan Zulu, we faced one of the most merciless and terrifying enemies to ever threaten the burgeoning colony.


​The Scarlet Bastards - The Cardinal of Gleann Ceallach - ebook


The Scarlet Bastards - The Cardinal of Gleann Ceallach - paperback

The Scarlet Bastards - The Bone Witch